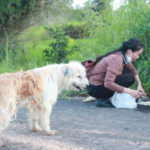 The loyalty that some animals have to their owners is surprising. An example of this is Leo, a street dog who has spent the last four years waiting on a road from Khon Kaen (Thailand) to his family until social networks have reunited them again. The loyal dog has gone viral on social networks in early September, when a Facebook user shared photos of the furry in hopes of … END_OF_DOCUMENT_TOKEN_TO_BE_REPLACED