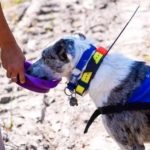 The new Internet hero is called Bear and he is a rescued dog who now rescues koalas from the fires of Australia. A few days ago the world was moved by the video of a woman who appeared walking through the fire and wearing her own clothes to rescue a koala who had been trapped in the fires of Australia. In the video, it looked like the woman took off her shirt, took the … END_OF_DOCUMENT_TOKEN_TO_BE_REPLACED