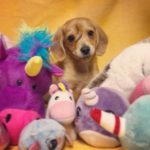 When Narwhal, the puppy with a tail that grew in the middle of his forehead was abandoned and treated at a rescue center, many of those who followed his sad story through social networks already predicted that the queues for adoption would be "historic." This 'unicorn dog' stole the hearts of thousands of people around the world after the Mac's Mission rescue organization … END_OF_DOCUMENT_TOKEN_TO_BE_REPLACED