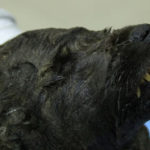 The body of an 18,000-year-old puppy, which was found in an almost perfect state, has left scientists baffled. Russian scientists discovered the body of the canine near Yakutsk, in eastern Siberia. Preserved by permafrost - which is ice that must be frozen year-round - the animal's nose, fur and teeth are extraordinarily intact. Using the dating by carbon 14 in bone of … END_OF_DOCUMENT_TOKEN_TO_BE_REPLACED