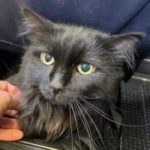 A missing cat has become known on social networks after knowing its incredible history, which dates back five years. In 2014, Sasha, which is what the little pet is called, disappeared from his home, located in Oregon (United States). A loss that, according to several media, occurred at night and in one area there is a forest where coyotes are common, so the owner thought … END_OF_DOCUMENT_TOKEN_TO_BE_REPLACED